That short story I posted a month or so ago? It’s a full-fledged novella now. 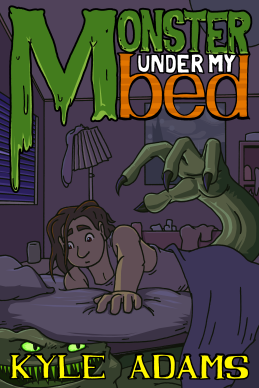 I love the cover art. It was drawn out by Mason “Tailsteak” Williams. Been following his comic art for years, and it was great to have him draw Roger and Mumb for me.

Running at about fifty pages, Monster Under My Bed is a new story about Roger Whitt, daycare custodian and imaginary-monster-wrangler-in-training. Here is the blurb:

Roger Whitt has a monster under his bed. The creature is imaginary, but that doesn’t make it any less hungry. Or dangerous.

Despite growing up into a respectable young man, Roger has kept the sense of wonder he had as a child. Because of this, he sees what other kids see: monsters hiding in the shadows, under beds, in closets, and around corners. These monsters have gotten stronger as Roger got older, and now they threaten his life.

If Roger can’t keep a handle on his fears and learn to be a monster hunter, his own imagination will swallow him whole.

The eBook is available today! I’ve posted it on Amazon and Smashwords. The latter has it available for free, and as soon as Amazon price matches, you’ll be able to get the book there as well.

It’s been a short, but fun, experience; meeting Roger Whitt and learning who he is and what he’s about. I do hope that any readers will learn to love him and want to hear more about him.

Because, in all likeliness, I’m not done with Roger’s stories. Give him a shot and see what you think! Why not, right? It’s free!

In other news, I have a local ‘Launch Party’ event going on for Through the Lichgate tomorrow. It’s time, the very first time, for me to go out and put myself on the spot, meet some potential readers face to face. It’s both exciting and terrifying.

And, in the meantime, I need to work on the sequel to Through the Lichgate. This upcoming book is titled Illusion of Grandeur. If you’ve read the first book in the Drama Club Presents series, you know exactly what that means. Or, at least, who the book will be focusing on.

I’m also writing a Young Adult Christian action book, which I may try my hand at publishing traditionally. It’s very weird. I’m not ready to say much more about it, but keep your ears peeled (ew).

That’s all for now! More news to come, on this blog and on my Twitter.